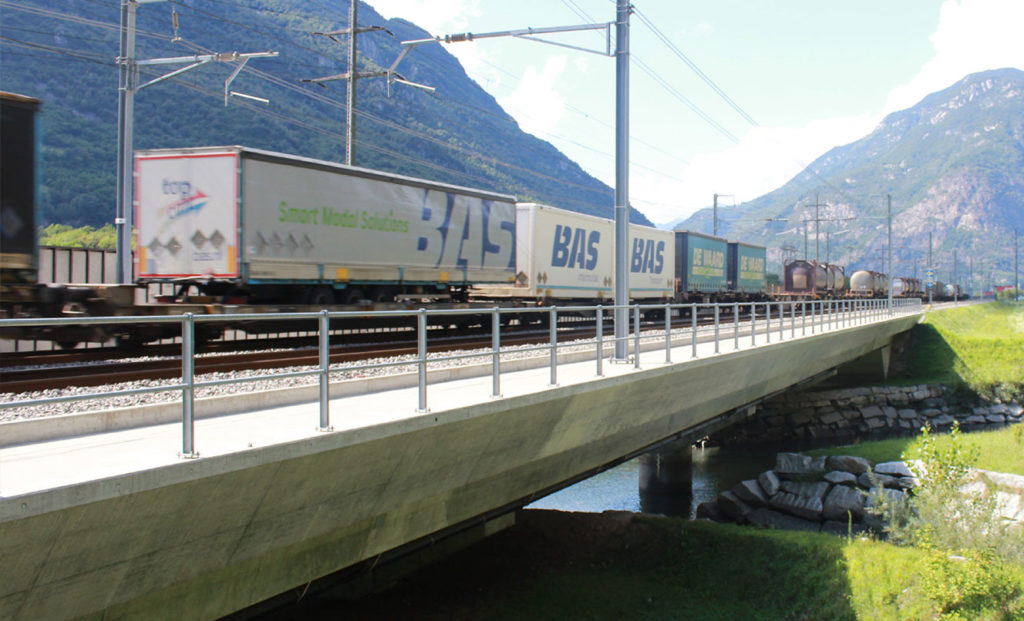 What concerns the Giustizia interchange (Lot 626) of the new railway line ATG in Biasca, a new railway bridge has been planned and realized above the river Froda. The bridge is a prestressed concrete deck built as a continuously full section spanning beam with 4 spans and point supports perpendicular to the main axis of […] 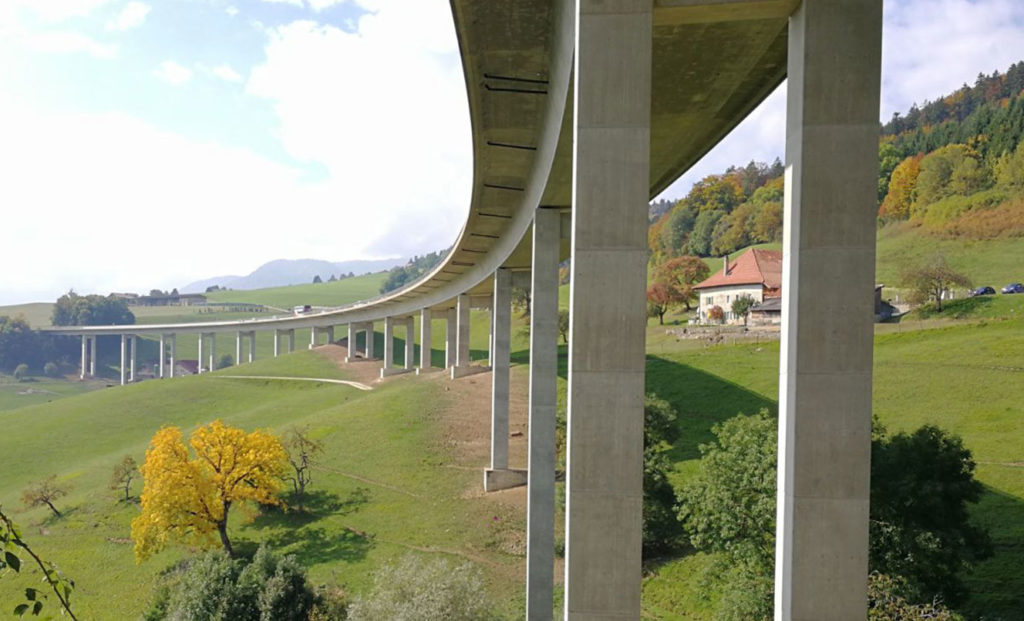 The project consists of planning and conducting visual inspections of 817 highway structures (lot 2) along the N01, N05 and N09 (GE / VD / FR), executed in the period 2014-2018. The inspections, about 200/year, interested bridges and viaducts, overpasses and underpasses, wildlife crossings, support works, protection works, underground channels, oil separators. After a first […] 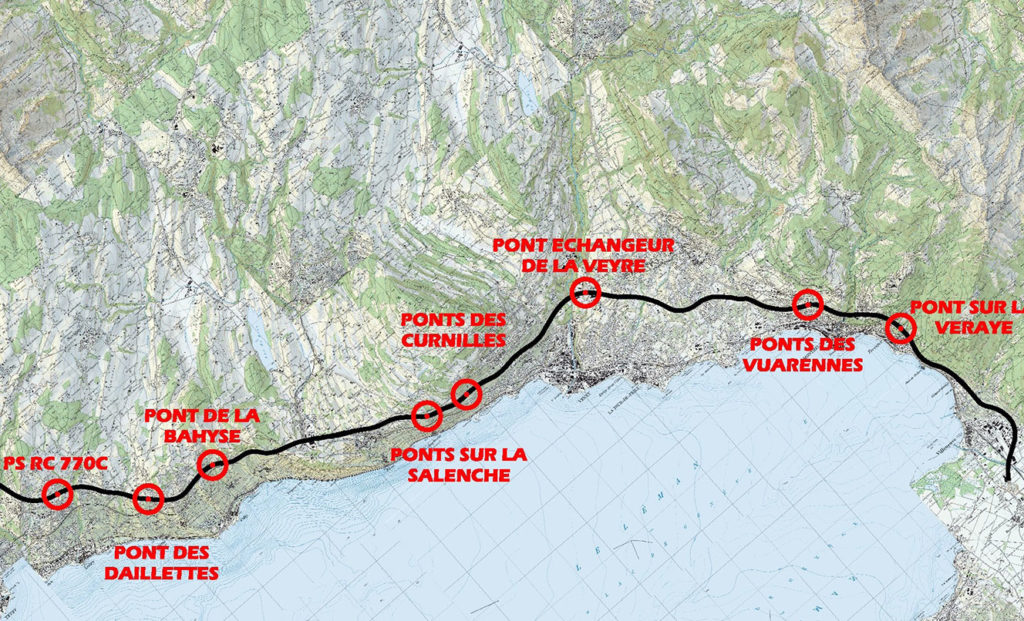 The project refers to the N9 highway between Vennes and Villeneuve, from km 12,490 to km 35,250, with the rehabilitation of 25 expansion joint of the structures along the section. The works, after inspection, replacement proposal and intervention proposal, were partially carried out by using Fly-Over and partially thanks to a traditional traffic management (TGM> […] 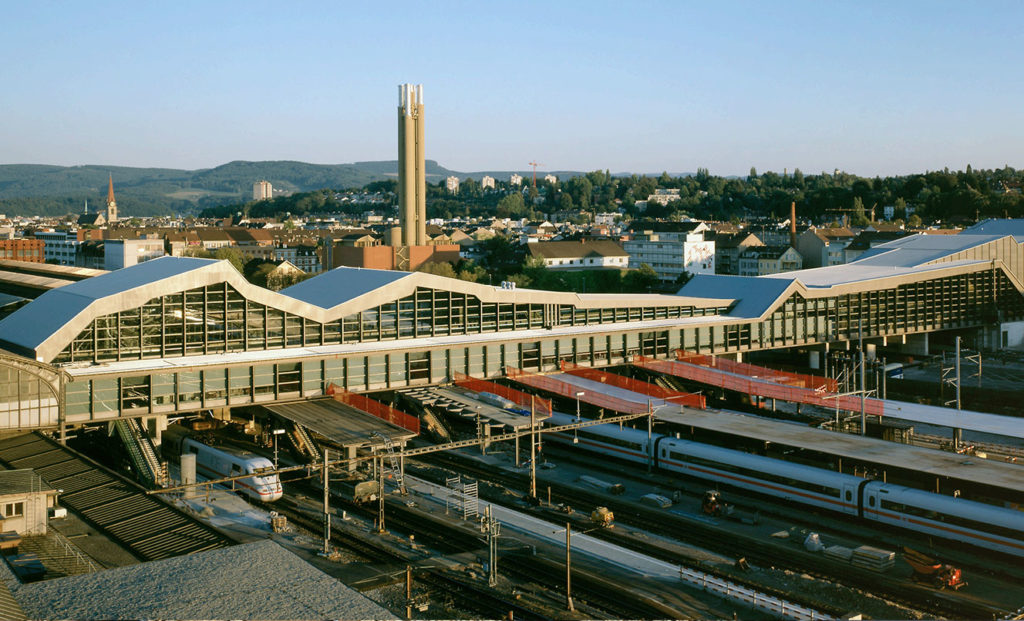 In the extension project of the Basel Central Station a footbridge was built in order to connect the old ticket office to the new commercial centre in the southern area of the station. The main structure is in prestressed concrete with following dimensions: 30 x 183 m; height of the rib 1.1 m. The incremental […] 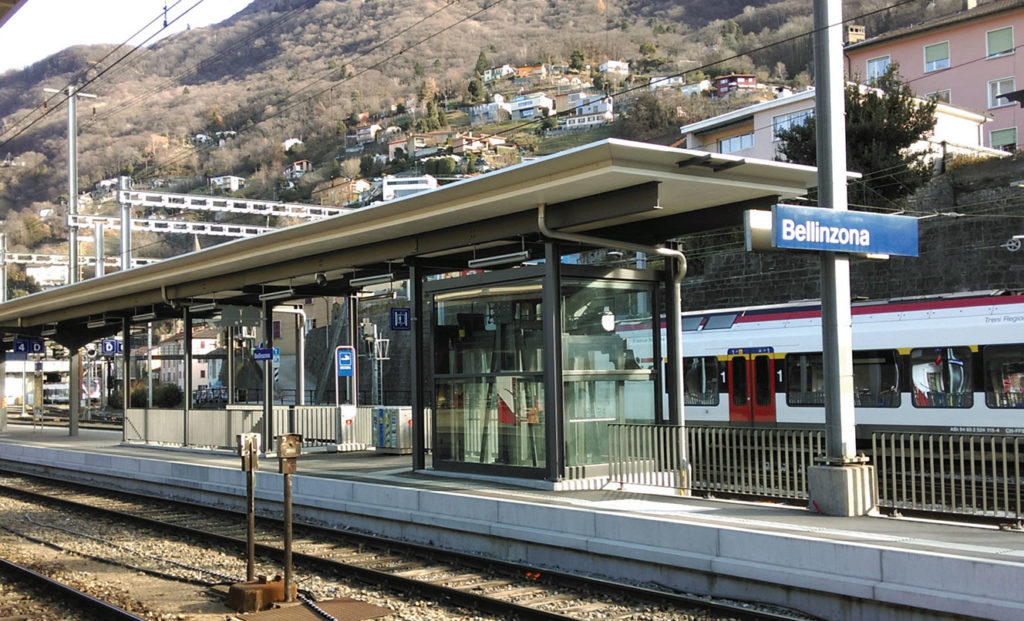 The project concerns the adaptation of the Bellinzona railway station according to the new law on disabled people (H55) between km 150,590 and km 151,125 along the 600 Arbedo-Castione – Bellinzona line. As part of the project, several interventions were carried out, including extension, modification of geometry, widening and raising of the existing sidewalks, enlargement […] 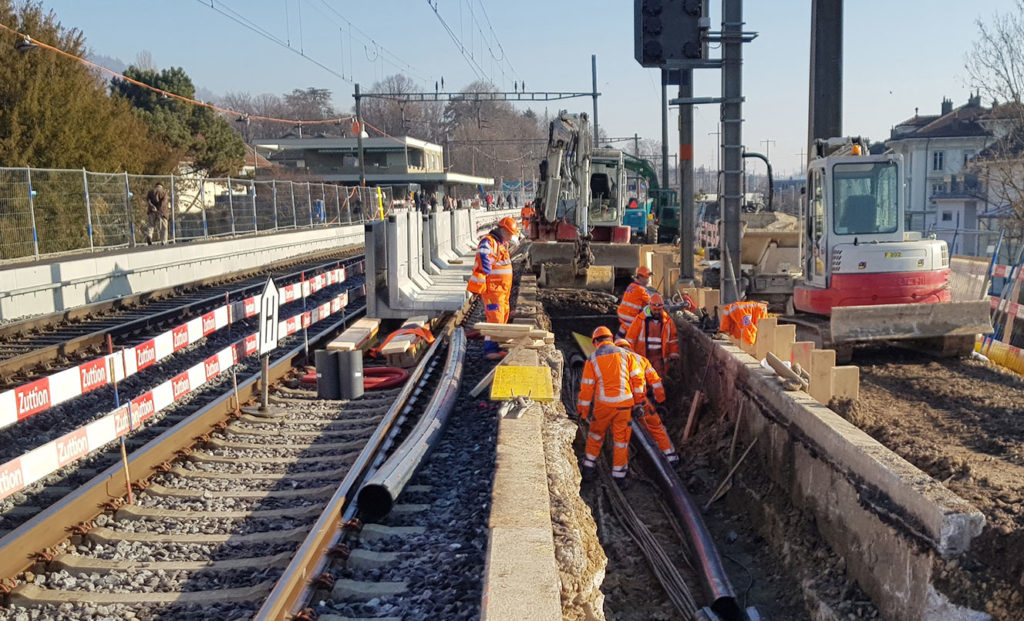 The project concerns the adaptation according to the new law on disabled people (H55) of the Rolle railway station, located between km 26,515 and km 26,860 along line 150 Lausanne – Geneva Airport. As part of the project, various interventions were accomplished, including extension, modification of geometry, widening and raising of existing sidewalks, demolition and […]

The project concerns the enhancement of public spaces in the Soldini district in Chiasso, where 2’300 people live and where there are different artisanal and industrial productive activities. Aims of the project are: reorganisation of the road system proposing responsive materials and items of furniture; realisation of connection spaces in private areas and/or with public […] 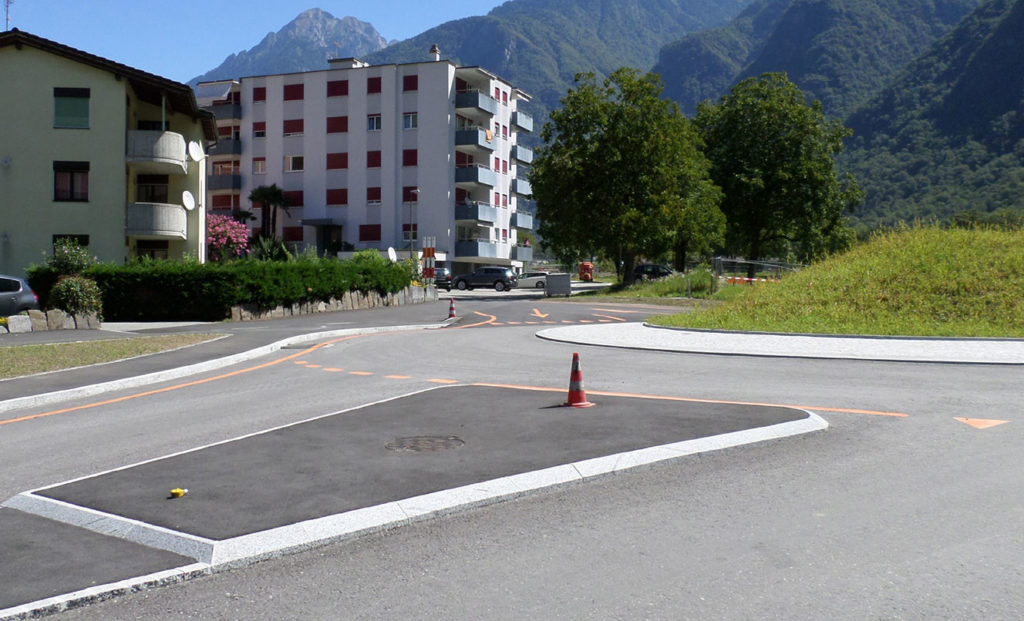 As part of the project relating to the construction of the Roveredo ring road, in addition to the new main axis of the N13 highway, the “Italian road”, that previously ran along the centre of Roveredo, was moved along the Moesa river. The new cantonal artery, planned to become the main axis for the Bellinzona-San […] 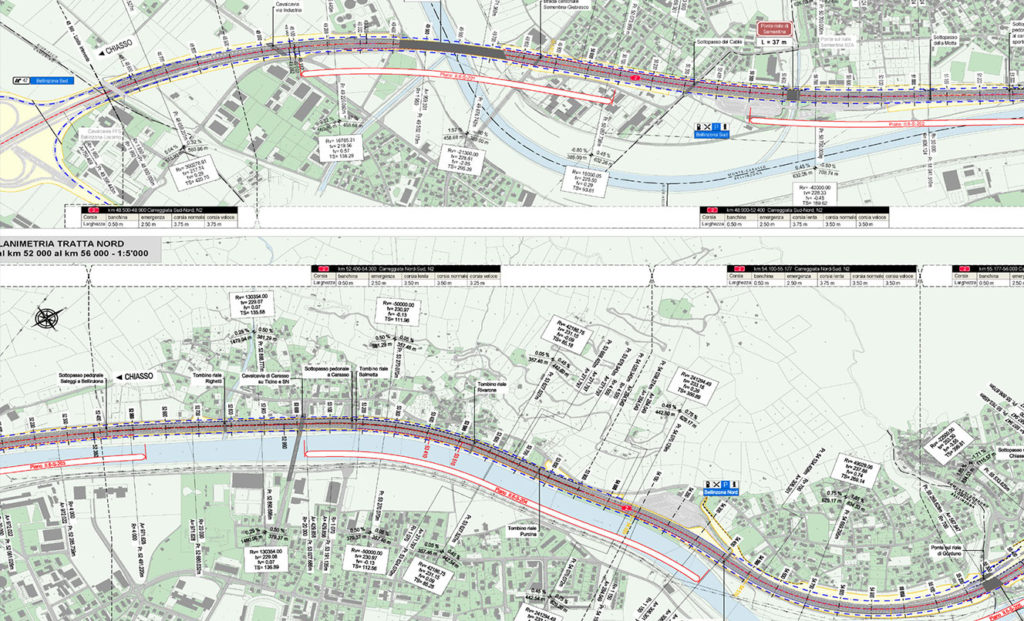 The project concerns the N2 highway section between km 48,500 and km 56,000, including the Bellinzona Nord junction (N02-N13), with rehabilitation of: road superstructure, buildings, water evacuation system, safety barriers and fences, electromechanical installations, signs and noise barriers and construction of 3 new road wastewater treatment plants (SABA). This is a complete rehabilitation project that […] 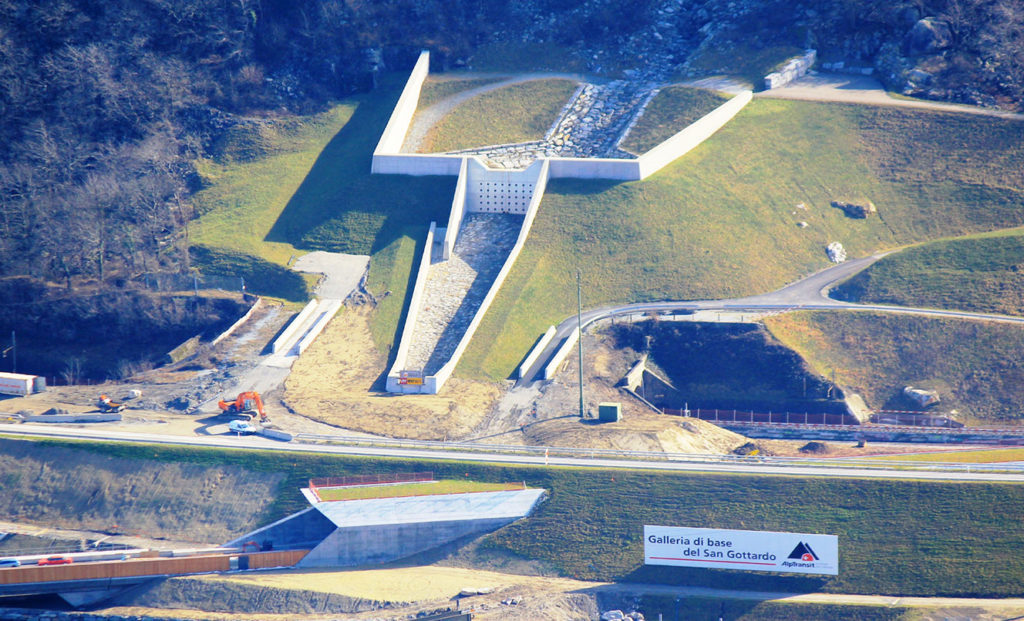 The project interchange Giustizia (L626) of the new ATG railway line in Biasca concerns also the realisation of the Stabiello channel and cofferdam. Aim of the structure is to protect the railway line and the road from debris flows in case of flood. Designed and realised to host a volume of 5500 m3, it has […]